Steps towards Becoming a Cloud-First Enterprise

Most companies now select a cloud-first approach when constructing their systems to reduce the burden of operation while maintaining a low initial investment. However, this often entails tasks such as migration of data from existing systems and integration with on-premises environments.

In some cases, the company has no other choice than to develop an application from scratch to sync such systems. Naturally, doing this for each situation like this requires considerable amounts of time and human resources. It also restricts the company's ability to adapt to changes in the market. 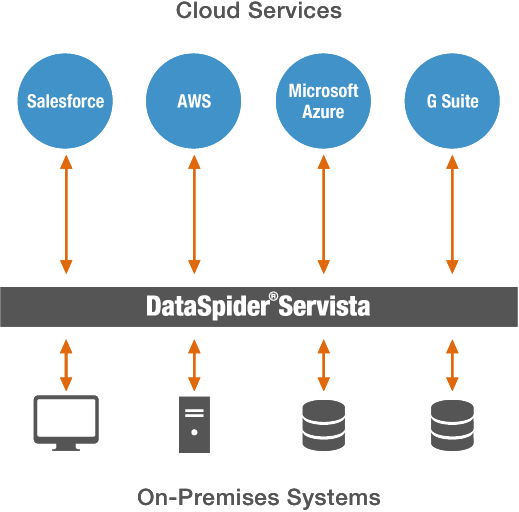 To solve these issues, smart companies use enterprise application integration (EAI) middleware to sync their systems and automate processes.

The best EAI products enable everything to be set up without coding, considerable savings in time and cost. Not to mention, making any future changes and adjustments hassle-free.

Such EAI middleware is equipped with adapters for integrating cloud services such as AWS, kintone, Salesforce.com, and Windows Azure. Data from on-premises environments can be migrated to or synced with databases in the cloud by configuring just a few simple GUI settings.

It should also be equipped with a wide variety of other adapters to allow integration with SAP products, Lotus Notes, fixed length format, Excel, various types of relational databases, email applications, and more. By using these adapters, with just the settings configured using the GUI, integration between cloud and on-premises environments can quickly be realized, and flexible system operations become possible.

An example of such middleware would be our product, DataSpider Servista. Below is a diagram showing the adapters it offers.

An online retailer developed and operated their store entirely by themselves on their on-premises server. Over the years, as their business grew and evolved, they migrated it to AWS. Using a public cloud to operate their point management system and product ordering system significantly improved efficiency and site speed.

However, their production management system resided within enterprise resource planning (ERP) software. Since this critical system is what they use to track their inventory and production progress, they wanted to keep it housed on-premises, at least for the time being. This meant they had to find a way to connect and sync their ERP system with their store on AWS. To do this, they chose EAI middleware to synchronize data such as notifications of shipping status, production status, inventory, and so on.

The ability to go through the development process quickly using just the EAI middleware's GUI greatly simplified the development process. No coding was required, which meant that any future changes that may be needed would be relatively straightforward. Also, they wouldn't be locked into depending on a single individual who understood the code.